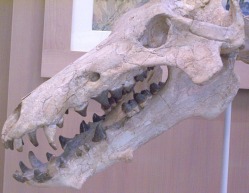 Suoidea - This dramatic superfamily includes the Suididae or true pigs; Tayassuidae or fossil and extant peccaries; and Entelodontidae, extinct pig-like animals that include the well known Archaeotherium and Dinohyus. Entelodonts are extinct bunodont suids which entered North America from Asia during the late Eocene in an already derived format. Large in size, the remains of Archaeotherium are most common in late Chadronian and early Oligocene floodplain environments of the White River Badlands.

Few fossils from the Badlands look more incredibly bizarre than the giant pig-like entelodonts. All five genera of this family are characterized by having long massive skulls packed with tusk-like canines, primitive pointed premolars and large, robust molars. Archaeotherium is probably the best known genus but Dinohyus, the last of this family, is the largest and their skulls reached five feet in length. Regardless, the entelodont's brain capacity is very small and they probably functioned largely on instinct.

The distinct feature of the entelodont's skull is the enormously developed zygomatic arches. Located under the eyes, these massive bony projections extend laterally and presumably afforded protection to the head and neck when fighting with conspecifics. Pairs of bony knobs also extended downward from the mandibles (lower jaws). Overall, entelodont bodies were powerfully built, boar-like animals with short stocky necks, but with functionally long didactyl feet that are proportionally longer than living suids.

Although entelodonts left no ancestors, their dentition suggests they were omnivorous and fed at least as much on vegetation as upon flesh. In the front of the mouth, their incisors are pointed, increasing in size until they reached the large, pointed, recurved canine teeth which, in juvenile stages, were serrated on the lateral surfaces. Premolars are simple compressed conical teeth and dentally, this formula and its masticatory apparatus is much more carnivore-like in form and function. The molars, however, resemble those of modern ursids, a group of carnivores that are surprisingly herbivorous in life.

The diets of entelodonts may have been similar to that of most recent suids and peccaries, one comprised primarily of insects, small animals and reptiles, vegetation and roots. The large mandibular warts and narrow maxilla would have been useful when rooting for food as well as when excavating borrows of Stylemys tortoises that were locally abundant during the late Eocene and Oligocene, and when feeding on the burrows' occupants (reptiles, mammals and carrion). They may also have been important scavengers, there being no comparable "hyaena" at that time. Although there were numerous browsing ungulates present in the late Eocene through the early Miocene to provide a ready source of food in the form of carrion, browsing ungulates do not normally form social aggregations large enough to support large predators. Broad floodplain environments do, however, provide ample opportunity for drowning and mass catastrophes. Finally, the teeth, and particularly the enlarged canines, may also have been used in fighting for mates, dominance, food, or territories, and bite marks on the skulls of many specimens are common. Jugal flanges, mandibular tubercles and canine size may also be sexually dimorphic but this has not been proven.

Other related groups of the superfamily Suoidea include the much smaller peccaries, Tayassuidae, of which at least 17 genera show similarities to modern day peccaries. Like entelodonts, their teeth were strong and robust, with large tusk-like canines but their skulls were much less massive than those of entelodonts and overall, most fossil peccaries were similar in size to extant species. Unlike entelodonts which became extinct in the late Hemmingfordian NALMA, peccaries are primarily a genera recorded after the start of the Miocene; three genera are still living today. Two additional but poorly understood genera of primitive peccaries are known only from the late Chadronian through the early Arikareean NALMA.

Of final note is the Anthracotheridae, an odd blend of hippopotamus and peccary, which are probably most closely related to the oreodonts. In the Badlands area, examples of Bothriodon have been rarely found in Oligocene sandstones.

Taxa of Pigs listed by abundance 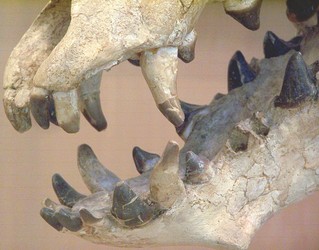 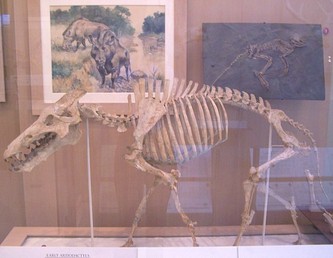 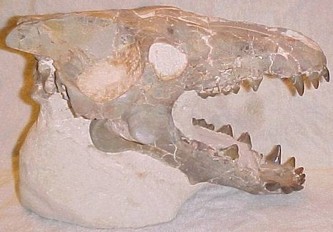 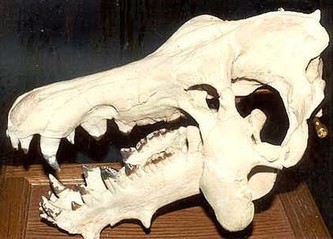