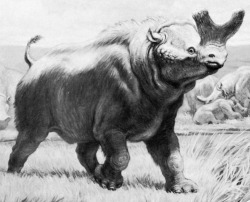 During the Eocene brontotheres represented the largest mammals found in North America and Asia. Brontotheres were large robust animals, with the last forms reaching 14 ft in length and 8 ft at the shoulder. The body appeared to have the form of a rhinoceros but with more elephant-like legs and feet. The head was large and stocky with small eyes located to the front of the head and ears far in the back. The teeth were large and blocky, with some reaching diameters of 4 inches.  All possessed advanced adaptations for cutting and crushing leaves and other plant material. Skulls of the last forms often possessed large horns; one of the two last species, Megacerops kuwagatarhinus, had a very large bifurcated horn on its nose. The other species, Megacerops coloradensis, had a pair of shorter horns above its nose.

Fossil of these animals are found, sometimes commonly, in the White River beds of the western U.S., but are usually only fragmented teeth or bones.   Recorded initially from the Wassatchian NALMA of the early Eocene as small, dog-sized mammals, the last forms from the Chadronian NALMA of the latest Eocene were the size of medium-sized elephants.  Remains of Megacerops coloradensis are the most commonly found brontothere and one of only two species currently recognized from this time period.  The other, much more uncommon, species is Megacerops kuwagatarhinus.

Early paleontologists discovered gradual changes in the skulls of brontotheres found at different levels, with horn cores generally becoming longer and larger, incisors generally decreasing in number, and nasal canals tending to shorten as the formations approached the end of the Eocene. In some of the youngest beds, skulls lack all incisors, possibly an adaptation allowing for a more prehensile lip. Regardless, the great variety of different horn shapes and sizes present in different specimens lead to a bewilderingly array of names during the heyday of “splitting” by such famous paleontologists as Edward Cope and O. C. Marsh. Henry Fairchild Osborn’s 1929 two-volume opus offered far too many names for a species so confined in space and time.  Recent taxonomists such as Mathew Mihlbachler (2008) have reduced these various genera and species of the late Eocene to only two species of the genus Menacerops, all other genera and species now being considered synonyms differing only by individual age and/or gender.

The life of brontotheres is still inconclusive, with many species, and especially the last forms, being compared to modern rhinoceroses.  Some researchers feel that consideration should be given to brontotheres being considered a late Eocene ecomorph of the elephant.  If elephants can be described as very large browsers, replete with tusks that function during feeding and fighting conspecifics, they compare well with brontotheres of the late Eocene.  Both families evolved from unremarkable ancestors the size of pigs or tapirs, with little indication of their final form.  During their evolution, however, both groups grew to gigantic proportions, the variously shaped horns of the final genus of brontotheres, Megacerops, having large nasal horns which appear to have been used primarily in conflict with other males.  Final forms developed structures on their noses, and, in the uncommon Megacerops kuwagatarhinus, became spectacularly bifurcated.  Speculation had it that these horns were used primarily for intra-specific combat, with contemporary species using their horns and in different means of attack: frontal, lateral and as locking mechanisms much as co-existing bovids fight intra-specifically in widely differing fashions depending on the nature of their horns.

Brontothere dentition strongly suggests that they were obligate browsers, just as some populations of elephants are.  Often compared to rhinoceroses because of their nasal horns, later brontotheres were far larger than heterospecific rhinoceroses such as the browsing Subhyracodon that co-existed with them during the late Eocene.  Modern elephants of Africa do or did co-exist with two species of rhinoceros and in Asia, the same could be said, until recently, of three species of rhinoceros that do or did co-exist with them.  In essence, brontotheres are best described as being very large browser-grazers which inhabited both forest and open woodland habitats.

Brontotheres are thought to have preferred warm temperate to subtropical environments in habitats that ranged from closed forests to relatively open river-marginal woodlands. Both of the final species have been recorded in northern Colorado, western Nebraska, eastern Wyoming, the badlands of South Dakota, and northward into Saskatchewan.  The fact that both species have been found in geographical proximity to each other suggests that each species utilized a distinct niche, perhaps one defined by vegetation type or foliage density, a niche that allowed both species to co-exist ecologically.  Although it is thought that a general cooling and drying trend throughout their range is largely responsible for their disappearance, more complex factors, such as the continued reduction of forest cover and the resultant loss of preferred foods, may also have been involved.  Regardless, titanotheres disappeared as their forest habitat disappeared, unable to adapt to the gradual opening habitat as the smaller rhinoceroses did.  Brontotheres are only recorded from the Eocene epoch and all forms disappeared at the end of the Chadronian. Once gone, this niche was not immediately filled and would remain vacant in North America for 12 million years until the arrival of proboscidians during the late Miocene epoch.

Taxa of Brontotheres listed by abundance 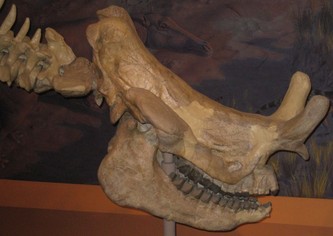 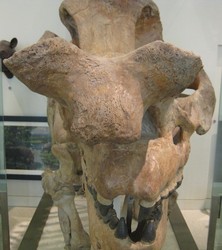 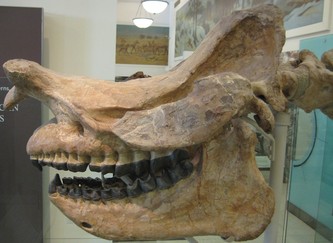 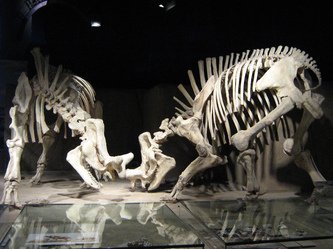